A Golden (Anniversary) Weekend in LA: Celebrating the Past. Shaping the Future.

As part of a growing relationship between our Industrial Design team and UCLA’s Architecture and Urban Design department (see my December 3, 2015 post ), Monogram was a sponsor of the department’s 50th anniversary gala on March 19th. 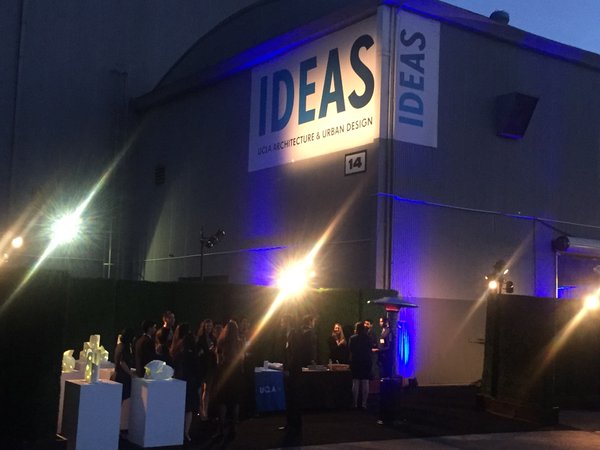 Among those joining us at the celebration was our good friend and noted Los Angeles kitchen and bath designer Laurie Haefele and Professor Craig Hodgetts, an AIA- award winning architect and teacher.

The evening included remarks by Dean Block, UCLA’s Chancellor, and Hitoshi Abe, Chair of the School of Architecture, along with thoughtful tributes to Denise Scott Brown (co-author of Learning from Las Vegas), architectural preservationists The Palm Springs Modern Advocates, and industrial designer Yves Behar (designer of the GE WattStation, the Movado Edge and the Sodastream Source, among others). It was a terrific evening, and as they say, “here’s to the next 50 years!”

While in LA, my wife and I took the opportunity to play tourists and checked-in on two must-see’s for any designer.

After a Friday morning review of the graduate architecture student’s Cybervillage projects, it was off to the newly renovated Petersen Automotive Museum on Wiltshire Boulevard. Whether you’re a car enthusiast or not, the mark the automobile has made on Southern California is undeniable. The museum recognizes this history in an upbeat and vibrant fashion and is worth a visit.

The Silver Gallery at the renovated Petersen Automotive Museum

Saturday morning was spent enjoying the buildings, grounds and art at the Getty Center. The views from its hilltop perch in the Santa Monica Mountains are worth the trip alone, providing the viewer with a unique perspective of LA.

And I must sheepishly admit that as an admirer of modernist architecture, I was more enamored with the Getty’s architecture than the art on display in the galleries. Shame on me.

One thought on “A Golden (Anniversary) Weekend in LA: Celebrating the Past. Shaping the Future.”